Some blogs to help
you live better... 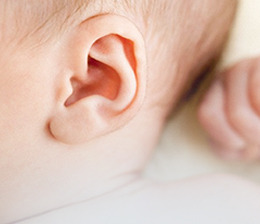 Although a majority of the hearing loss problems are commonly found in old age, the young people, especially the children are not excluded from hearing disabilities. Studies show that every year about 7% of the children are born with various types of hearing impairments in India. While some children develop it gradually with time (typically known as Acquired Hearing Loss), most of the children are born with hearing disabilities (known as Congenital Hearing Loss). Hearing ability is especially important for children, as it helps them to develop speech and language skills. If a child is excluded from this basic yet vital sense organ, he/she usually show speech and language disorders, and even other developmental problems.

While childhood hearing loss is becoming quite common day by day, a good news is that a majority of the hearing problems in children can be fully cured, which was not so a few years back. In the last few decades, hearing problem treatment has undergone vast developments, as the technology started flourishing. Previously, hearing problems in children went undetected till as late as 2 years of age, when they did not show any developmental signs in speech and language skills, or even did not learn talking at all. As a result, the child suffering from hearing disabilities faced more and more problems with each advancing day. If hearing problem treatment is not started at an earlier stage, then the child may be deprived of all the facilities that his/her future would have otherwise had in store for him/her.

You as a responsible parent of the hearing impaired child, should start early intervention – immediately after he/she is born, to test whether there is any hearing disability present. It is done commonly through hearing screening tests, specially done for newborns, which is performed universally, and it should not be delayed at all. Hearing problem treatment for children vary according to the cause of hearing disabilities in them. It also depends on the type of hearing loss (mainly Conductive, Sensorineural and Mixed) and degree of hearing loss (mainly mild, moderate, moderately severe, severe and profound). With the advancement of technology, hearing problem treatment also gained great impetus, and if treatment is started at the earliest stage possible, then the child may even be completely cured of all hearing disabilities with such revolutionary treatment techniques used today.

As mentioned earlier, childhood hearing loss can be either Congenital, which appear from birth, and Acquired, which appear gradually over time due to various situations. Some common causes of Congenital hearing loss include premature birth and other birth complications, neuro-developmental disorders (nervous and/or brain disorders), intake of ototoxic medications by the mother during pregnancy, mother had some infection during pregnancy, maternal diabetes, intake of harmful drugs or alcohol, and/or smoking during pregnancy, and mental trauma or physical injuries occured to the mother during pregnancy. Apart from these, genetic factors might also cause hearing problems at birth. Acquired hearing loss in children is caused due to a perforated eardrum, progressive diseases like Otosclerosis or Meniere’s disease, infections like meningitis, measles, mumps or whooping cough, intake of ototoxic medications, serious mental trauma or brain injury, exposure to excessively loud decibels of noise (noise-induced hearing loss), untreated or frequent Otitis Media (ear infections), exposure to passive smoking, and many others. However, it is studied that about 50% of hearing disabilities in children occur due to hereditary issues, either at birth, or are developed a few years later.

Hearing problem treatment is immediately required for child hearing loss, as it is the vital stage in a child’s life to learn speech and language skills. Apart from these skills, being able to hear properly from childhood, a child will also learn other developmental skills. Hearing problem treatment for children includes wearing hearing aids, undergoing cochlear implant surgeries, various speech therapies and assistive listening devices. Let us have a quick glance at each of these treatments –